Today it rained all day for the first time in weeks. Halcyone and I made a quick stop at the local produce market for squash and couldn't resist this Cinderella pumpkin. It was almost free! The funny thing is, Halcyone needed to touch it. Like couldn't take her hand off the entire time she was in the cart with it. Like threw a fit when I took her out of the cart and put her in the car. Yikes, that's the first real tantrum. 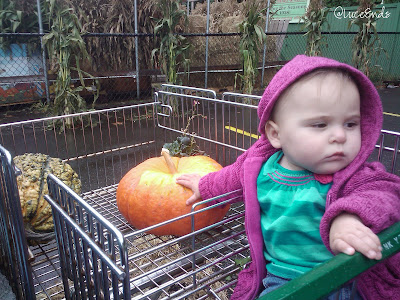 When we got home, we were hanging out by my sewing machine. Halcyone was looking out the window and started talking about birds. Then I realized there were probably 25 birds in our yard, flitting around. I guess we have something yummy they wanted, but I wish I knew what it was! Good thing Halcyone learned that word this weekend, or I wouldn't have understood!

... of God's Grace
1. Beautiful Autumn sunshine
2. A sweet little girl who asks for "Mama" when she's sad
3. Three raised vegetable gardens with veggies growing
4. Blackberries in the driveway; lots of them
5. A good walk with a friend
6. An excellent cup of coffee from Urban Coffee Lounge
7. My sewing machine
8. Bright colors adorning our home
9. A left-over dinner in the refrigerator
10. Proverbs, reminding me to trust, trust, trust
I'm not sure which sermon it was in, but sometime within the past couple years, out pastor was talking about noting the evidences of God's grace in our lives. He said it helped to write them down, to be able to look back and remember what God has done. I was watching Halcyone standing and patting everything with her soft little hands and chatting, thinking about how thankful I am to get this time with her. Then I realized there are so many more seemingly obvious things that should go on my list. So that's my list for today.
Posted by Stacy Luce at 3:05 PM 1 comments

Ten on Ten: Saturday Out & About

It's a Ten on Ten day again! Today we were out and about all over the place. We played at home, drove to Redmond for a birth-class-babies gathering, and had dinner with my parents. This month's pictures were once again, a joint venture. 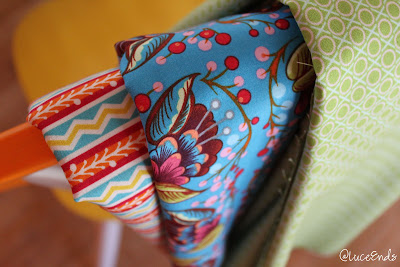 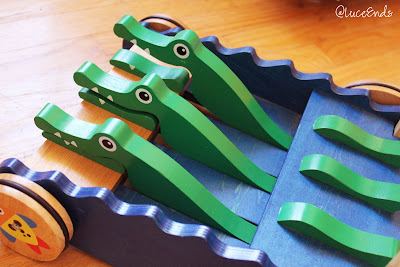 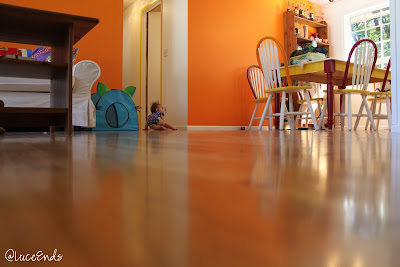 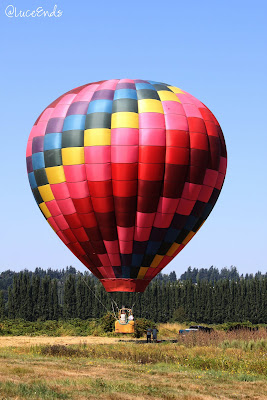 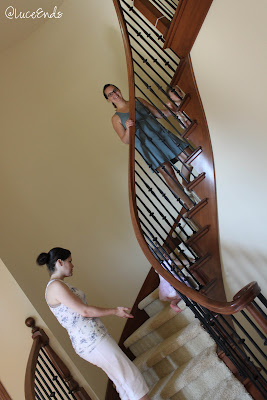 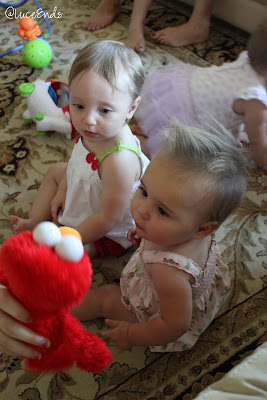 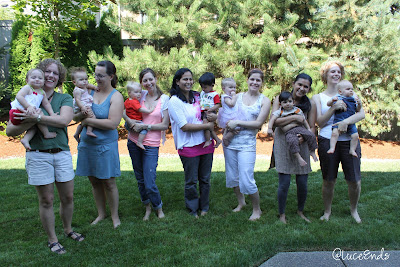 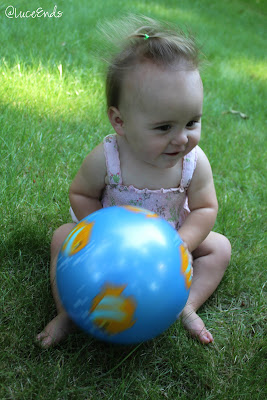 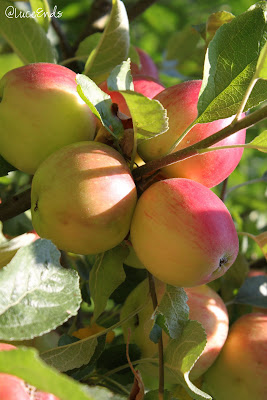 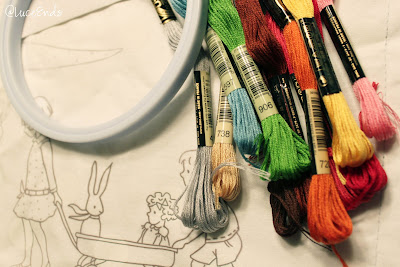 Links to this post
Labels: Photo, Ten on Ten

On my ride into work this morning I got soaked by a downpour, despite mostly blue sky and a forecast of temperatures in the high eighties.

The reward was an amazing display of crepuscular rays from another nearby cloud.  The image below was taken on my phone as soon as I could get off the freeway.  Not as stunning as it had been, and not rendered as faithfully by the phone's tiny CCD, but beautiful nonetheless. 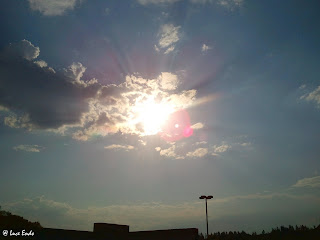 It's a Blackberry Sorta Dinner

Picking blackberries has been almost a daily occurrence for me at our new home. There are some great bushes growing down the middle of our shared driveway. The only other breathing creatures that seem to pick them besides me are a 10 year old boy and a 5 year old dog. Every day a few more have ripened up. I've made at least five cobblers already with the Pioneer Woman's recipe. (Hint, make your own self-rising flour, don't buy it!)
Tonight we're having salads with fresh blackberries! It's perfect for a warm day when I don't want to heat the house up too much with the oven. Here's what I like to do: 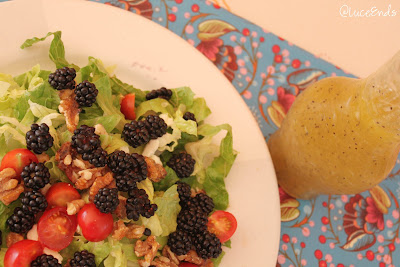 Salad
Wash and chop lettuce. Sprinkle with cheese, candied walnuts, blackberries, and cucumbers. Pour dressing and enjoy!
Candied Walnuts
I learned how to make these from Heather over at Days in Africa. Thanks Heather!
Melt the sugar on medium-high heat in a pan on the stove. Stir a little as it starts to melt so that it won't burn. Once liquid, remove from heat and dump in walnuts, stirring to coat. Let them sit for a few minutes to cool, then break apart and serve!
Dressing
Mix the following together in a small food processor:
(I ran out of cukes today, so we used fresh cherry tomatoes from a friend's garden instead!)
Posted by Stacy Luce at 4:08 PM 0 comments 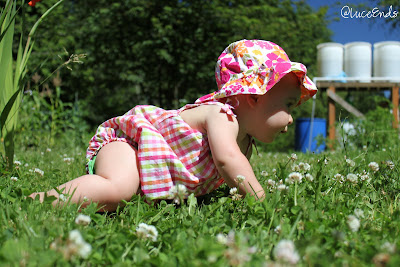 I just love this picture! Tom took it a few weeks ago when we were
working at our P-Patch garden. It was a pretty, warm day.
She just wanted to crawl everywhere and touch everything!
Posted by Stacy Luce at 10:14 AM 0 comments

People complain about their kids. Parents playfully offer their unruly kids up for free to whomever will take them. Pregnant moms whine about being fat. New moms go on and on about not getting enough sleep. Parents of teenagers and younger adults tell you to enjoy the little years because you'll hate your kids in a couple more years.

Every time I hear one of these complaints I want to scream at the person. We can't just decide to have a baby. Many people can, or think they can. Actually, it's God who decides that.

A few weeks ago I was invited to a cousin's baby shower. I almost didn't go because there was the potential for 3 pregnant cousins to be there. I don't have anything against the cousins, it's just hard to see them all so excited and happy about something that I'd like. It's not fun to feel left out, when it's not something I've exactly chosen. A day or so before the shower I was talking with my sister about expectations, attitudes, and imposed feelings of punishment. She was frustrated because she had expected something that didn't happen and felt like she was being punished. That's when I realized I was in the same boat. I expected to have several kids by now. I was letting it affect my attitude too much that week. And I was contemplating not going to the baby shower, imposing the punishment on the poor unknowing cousins, because I didn't want to go and feel sad. My sister and I reminded each other that Jesus knows what we think would be ideal and holds our breaking hearts in the meantime. Tom and I talked and decided it would be best for me to go to the shower. He suggested I take Halcyone with me so I could snuggle her when I started to feel sad. She and I went and had a very fun time together. It was hard and sad for me to be there, but Jesus helped me through.

I need to continue to work on my attitude and trust Jesus with the future. But.... It would also be nice if people realized how much complaining about their kids or the effects of their kids are really uncalled for. (Besides, no one wants to listen to a whiner.) According to the Center for Disease Control, 12% of women in the United States deal with some form of infertility. That means that more that at least 1 of every 10 females you know will likely struggle with conception at some point. That's a lot.