This Sunday, the church that supports our adoption agency held a service and luncheon to showcase embryo adoption and provide a chance for people considering, or in, the adoption process to meet and visit.  There were several cool aspects to this event.

In attendance was Dr. Theresa Deisher of AVM Biotech in Seattle.  She is an expert in stem cell therapy and an advocate for ethical stem cell research.  She spoke briefly on the ethics, economics, and issues in her field.  Of particular note was the amount of money and time spent on adult vs. embryonic cells, and the availability of treatment.  Apparently, the US has spent quite a bit of money and time on embryonic cell research, and has very little to show for it.  Conversely, in less time and for less money, other counties have performed clinical human trials with adult stem cells showing marked success.  I will attempt to do more research and write more on this as I learn.

King 5 was also there, and they produced a short news segment.

The part with me talking came out a little out of context.  Stacy and I howled with laughter when we saw it the first time.  We have had great number of ultrasounds, which as been a very cool opportunity to see Halcyone growing up.  At 9 weeks, she was the same size, and looked very similar to a gummy bear (actually, according to Wikipedia, she was pretty much exactly the same size).  We had seen a heartbeat on ultrasound several weeks before, but at the gummy-bear appointment she was waving her tiny arms and legs, hence my amusing 2 seconds of animated camera time... 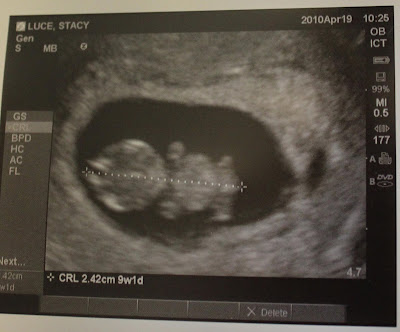 The most fun part of the afternoon was meeting people in various stages of the adoption process.  A couple that just had a baby flew out from Chicago for the luncheon and to dedicate their son.  Another couple, looking to learn more, drove up from Tacoma on short notice after hearing of the event.  Also at our table were a pair of 6 year-olds that were adopted as embryos, one of whom has still been 'born' for fewer years than he was in a freezer.  Several fast friendships were made and we all exchanged contact info to follow up on how everyone is doing in the future!

Thanks for Cedar Park Church and Pastor Fuiten for hosting and facilitating the speakers, event, and the adoption agency.
Thanks also to Maria Lancaster for putting the event together and running a program that is making an excellent impact in the lives of both parents and children.
Posted by Tom at 12:49 AM