When I was at Ikea this past spring I bought one of their $10 Wok pans. This week while waiting for my used books to be looked through at Third Place Books I found a cookbook, Easy Chinese Stir Fries, that looked like it had recipes I could manage.
Last night I decided to try the Kung Pao Chicken with a few modifications. I left the peanuts out and added some orange bell pepper and mushrooms. The recipe called for some small chili peppers, but said I could substitute red pepper flakes for them. I chose to do this because I didn't want to run over to the grocery store when I had the flakes.
I put the chicken in a little of the prescribed marinade, cut the veggies up, stuck some oil in my Wok and added 2 tablespoons of pepper flakes. That sounded like a lot of pepper flakes, and I could hardly breath in the kitchen because of the pepper fumes so I double checked, and yup it still said tablespoons. The chicken and veggies cooked nicely in the Wok and we attempted microwave rice because I forgot to start it earlier on the stove. 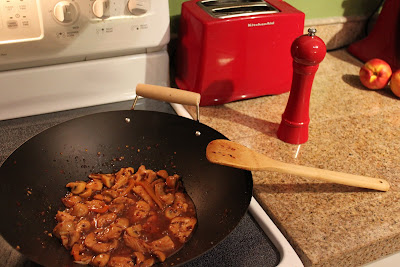 Everything looked and smelled right. We sat down to eat and Tom stuck one of the mushrooms with rice in his mouth and I had to put out a small fire. The chicken and veggies were sooooo spicy that I wasn't able to eat it. Tom managed to eat a little more of his, but wow! He went to look at the recipe and sure enough.... it said teaspoons! Well, next time I'll triple check on the measurement of peppers. The flavor was just what I was hoping for aside from the spice, and the Wok was super easy to cook with!
Posted by Stacy Luce at 1:11 PM 0 comments 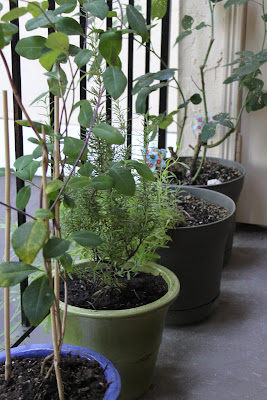 I love gardening, but have struggled over the last 3 years to find plants that will survive on our back deck. The deck only gets 2-3 hours of sun on a good day. The first year we lived here I planted about 5 different kinds of herbs, which didn't survive. Our Orangey kitty decided he liked to help himself to snacks of chives, and the rest turned yellow and became spindly. We had a rose bush that we brought with us from our previous home that likes to grow tall, but doesn't like to bloom. I also tried a primrose and a gerbera daisy that lasted for 2 summers.
This summer I've still got the crazy non-blooming rose, but we've added a few things that seem to be happier! A lavender plant and some transplanted mint both smell wonderful when brushed. Tom's mom gave me a rosemary bush and an azalea which are also doing really well! (As long as you don't count the kitties who think a chomp of azalea is a good snack!) I have 2 kinds of succulents, and recently added a honeysuckle plant. I spent a couple days looking for inexpensive, non-plastic, brightly colored pots and scored at Ravenna Gardens and Ross. I also found a deck table in an icky green metal color at Ross that I spray painted an exciting grape color. 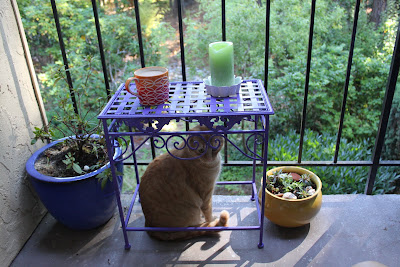 Now I can sit out on the deck and read! This consternates the kitties a little because they thought they owned the deck, but this morning Orange was willing to share the space with me once we saw a woodpecker on one of the backyard trees!
Posted by Stacy Luce at 1:17 PM 1 comments

Today I got to meet my sister and a couple friends to watch the new movie, Julie & Julia. I loved it! This is one of the few chick-flicky movies I've seen in the past several years that had a good story, based on a couple of true stories (My Life in France by Julia Child and Julie and Julia by Julie Powell). I appreciated this movie because it showed the value of a stable trusting marriage, something pretty rare as far as I can tell in Hollywood.
Before this, I had never given much to who Julia Child was, but now I'm intrigued. I stopped in Borders at the mall after the movie to see how much Julia Child's cookbook, Mastering the Art of French Cooking, cost in all it's large hard backed glory. I was expecting to find a $50-60 book, but was shocked to find it on a front display in a 2-book hardback set for only $20! Somehow on top of that they gave me an extra discount that left me only paying $15! I'm looking forward to trying my new recipes... and I promise I won't try every one of them in a year's time. I didn't know the other 2 books this movie was based on were even available, but they are so now I'm on the hunt for a couple good used copies. I'm also curious if I will be able to dig up any of the old episodes from when Julia was in her television cooking show.
Posted by Stacy Luce at 5:15 PM 0 comments

Today I left to run to the rubber stamp store for paper, and instead came home with 2 huge garbage bags full of legos! As I was heading down the hill from our home, Tom's mom called to let me know she'd found several bags of legos at the Value Village a few streets up. I changed my route and met her. She wasn't kidding! There were enough legos (a rare commodity at a thrift shop) to fill an entire shopping cart. We've spent the evening sorting through the bags because there are some duplo style legos that we want to separate, and a few green army men, playmobile people without hair, and some megablocks. We're pretty amazed because they are very clean and not broken!
Posted by Stacy Luce at 8:49 PM 2 comments

I headed out this afternoon for a few quick errands. My last stop was in Kirkland to look at the flower pots at Ravenna Gardens and to pick up caramel sauce for the iced caramel macchiatos we've been churning through in the last few weeks.
Paying for a bright yellow flower pot in Ravenna Gardens and walking out to stick it in my car, I realized I had the panicky-low-blood sugar sensation. Sure enough, I was low. Normally I would just pull a grape Capri Sun out of my purse, suck it down in 3 or 4 swallows and be on my way again. This time I decided I'd walk into the Starbucks a couple shops down from my car and just get a sweet drink there while I picked up my caramel sauce. I got my drink right away and started drinking it down. That's when I realized that if I drank it all at once I wouldn't have any to enjoy slowly through the straw, which I always chew on subconsciously to make it last longer.
I reluctantly pulled a trusty Capri Sun from my purse and drank it quickly as I walked back to my car. I still felt the funny "low" feeling. I opened my door and sat down in the driver's seat. I reached to set my Starbucks drink down in the pull-out drink holder, and found myself opening the sunglasses compartment! This silly mix up reminded me to sit there for a few more minutes and recheck my blood sugar before "clearing" myself to drive home.
This is one of the funnier mix-ups I've had recently with a low blood sugar. So... if you ever see me doing irrational things, tell me to check my blood sugar!
Posted by Stacy Luce at 6:03 PM 0 comments

Yesterday Tom and I and my brother were looking for something fun to do outside. We decided to pick up Tom's parents' canoe and take the ferry to Vashon Island from West Seattle. Tom's Grandma owns some property there that I'd never been to, and Tom had not been there since he was about 16! While we were on the ferry we saw the Blue Angels flecking across the sky over Lake Washington. Leaving the ferry, we found a Subway for lunch and headed towards the property. We found it and parked on the side of the road to walk down to the beach and cabin. The driveway was overgrown with blackberries, ivy, fox tails, and a few nettles, but fortunately canoe paddles get rid of these pretty easily! Tom and I threw a bunch of rotting logs and trees off to the side and we were eventually able to drive down to the end of the driveway. 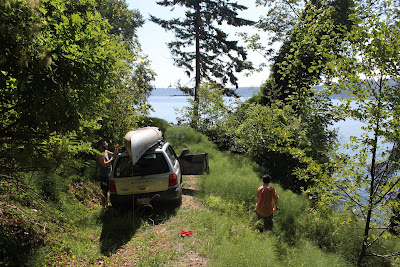 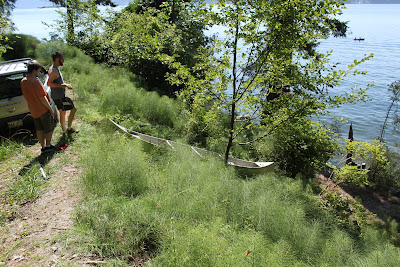 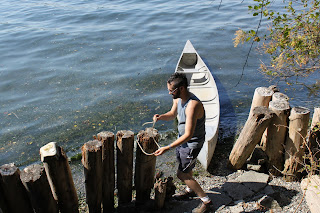 Once there, we had to get the canoe down a steep path to the water. Tom and my brother ended up sliding it down the trail in a controlled fashion. We put our brand new crab pot down with some chicken bait. I was amazed that the water was so clear! We dropped the pot down about 20-30 feet and could see it resting on the sand! I also observed a rather large jelly fish swimming around below us. We left the pot down for about 2 hours. When we pulled it up we had 2 red rock crabs, 1 of them was a keeper! The tide had gone out a little by the time we were getting ready to leave, so I was able to take some pictures on the beach and of the the front of the cabin from the beach. We found a large tonka truck had washed up! 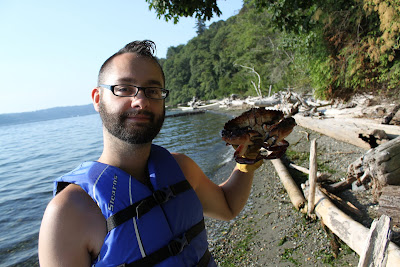 While we were waiting for the crabs to discover our crab pot, we enjoyed the sun next to the cabin. I was able to finish my Miss Read book, and Tom read a couple Tintin books. We enjoyed the day, the sound of the water, no traffic noise, and lovely weather! We're both excited to go back soon and help work on the property. 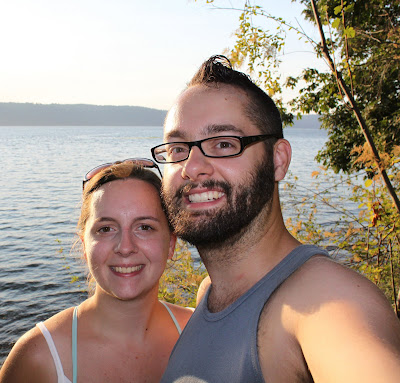 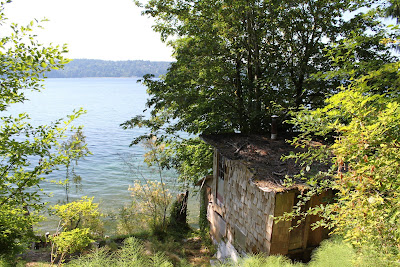 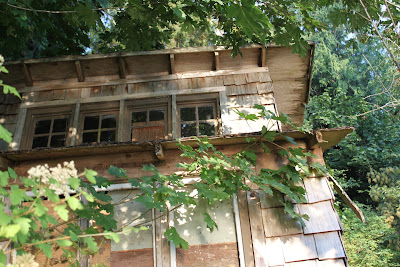