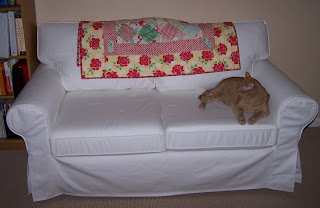 When we got married, we lived in a semi-furnished mobile home. A few months later, we were given a set of used couches from a friend I worked with who was moving and didn't want to take them with her. We've been using them now for almost 4 years. They were great, but really starting to fall apart! Also, our silly carpet, the main wall color, the couches, and our Orangey kitty are all the same color! I've lost Orangey several times on the couch. Every time you moved a cushion or tried to vacuum the couches, disintegrating stuff (it turned out to be latex) would fall out and dust everything around. Couches have been on our craigslist radar for a while. We knew we wanted the Ikea Ektop style, but weren't sure about which lengths we wanted or the colors. On Saturday Tom found several people trying to sell them, and started emailing and calling through the list.
We ended up getting a love seat with white cover (they are super easy to change and replace) that is less than a year old, and has only been used for house sale staging, plus they delivered it to us! We also went and picked up a sofa bed sized couch in Kirkland that is a few years old, and has a creamy corduroy cover. We hauled it home hanging out the back of the Jeep, and our neighbor helped us carry it in. 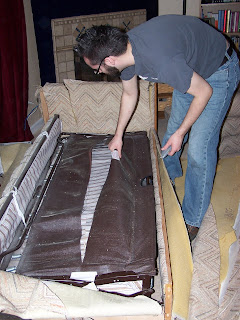 Then we had a problem... we still had our old couches in the living room. They were old enough and used enough that we couldn't sell them or donate them to a thrift store. Tom decided we should tear the large one apart to stuff in our dumpster to start with. That was fun, but then as I was picking up couch fragments all over the living room, my hands started breaking out and burning. That's when we realized it was latex! Tom finished pulling it apart and I started hauling it to the garbage and recycle dumpsters. That finished, we had to figure out something for the love seat sized old couch hanging out in the back of the Jeep. Tom's going to drop it off today at the transfer station.
Orangey immediately claimed the love seat and curled up. Missy was a little more hesitant, but eventually decided she could accept the change. Now we have a full water squirt bottle out, and are making sure the kitties learn that these couches are not for claws. Tom's thinking about making another small scratching post for the living room.
We're loving the new couches! They've got much more back support, and we don't feel like we're sitting on the floor. They also help make the room seem more open and bright! Come enjoy them with us sometime soon! 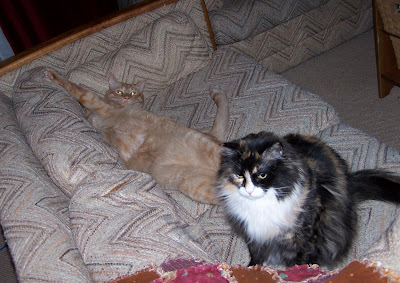 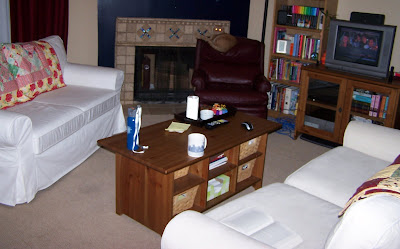