Last night Tom and I were able to spend time with our good friends the Lyons! It had been almost 3 months since we've seen them! I got to meet their new little guy, Noah (almost 3 months), and enjoying Josiah (a year and a half) showing me his fish, such fun little guys! 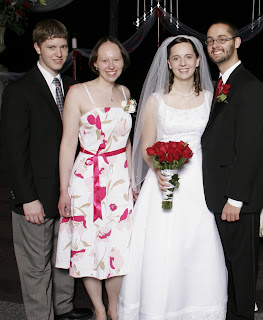 George and Mary are special friends of ours. They got engaged a month before Tom and I started dating, and we did a lot with them between then and our weddings, which were just a few weeks apart. Mary helped Tom figure out what size engagement ring to get me, without me ever suspecting a thing! We registered at Target and Linens and Things together, had a few movie nights (Napoleon Dynamite?!) with them, stuck up for each other when people said we were all too young to get married. Mary and I were candle lighters in each other's weddings, George was an usher at ours, and Tom was a groomsman in theirs. Then, when we bought our condo almost 3 years ago, it was about a quarter mile away from their condo. We did dinners and movies many times with them and even managed to squeeze in a few evenings of swing dancing, and Mary and I did a lot of scrapbooking and consignment store shopping together. 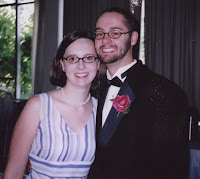 Towards the end of 2006, when neither Mary or I were working full-time anymore, we started spending a couple days a week together, doing all sorts of things. We even joined the gym together to get a discount plan and have accountability to go! We had discovered that we were all hoping to start our families in the near future. George and Mary found out they were expecting Josiah that Thanksgiving, which was awesome, but super hard for us to know how to respond emotionally. It took a few months of sorting things out, but eventually I got to where I could be really happy for them, and we started spending many hours together, mostly shopping for soon-to-arrive Josiah! I threw a baby shower for Mary in May, and then Josiah arrived in July early one morning after Mary and 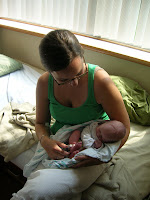 I had spent the day in the pool together. I got to meet him the day he was born. I think he was pretty much the first baby anyone had ever let me hold for more than a couple minutes! We continued to hang out when we could, but it got a little bit more difficult with job changes and life getting so busy for us!
In the beginning of 2008 George and Mary sold their condo and moved north, and were expecting little Noah to join them. It was again, hard for me to know how to deal with the news, but it was easier than before and so exciting! Mary and I met at the outlet mall in Marysville once over the summer for some shopping, I got to see her at her baby shower, and then in November I got to spend some time with her and Josiah, while waiting for Noah to decide if he was ready to meet the world. 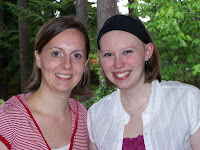 They have just recently moved into a house up in Marysville, and Tom and George have pretty different work schedules, so it was great to finally pull dinner with everyone together! It's so much fun to get together with people we both feel comfortable with, and have similar values. We talked and talked and talked, oh and got a tour of their new home! It was fun to see how they've set things up. I loved Noah's bedroom with little brown, blue, and white puppies, stripes and polk-a-dots everywhere. Mary made a super cute crib set to match it all. I enjoying getting to hold Noah for a while, his little eyes and facial expressions were so cute! I told Tom on the way home that I feel like I could just hold babies forever! He laughed and said that opinion will probably change one day, but I hope not!
We weren't sure what the weather and roads would be like on our way home, but we had already decided that it would be fun to drive back on Highway 9. There was ice on our car when we left, and we found little flutters of snow along the way. When we got to Cathcart and Snohomish there were huge flurries that were so pretty! In some places there was snow on the ground and coating all the trees, and the moon was bright which illuminated everything beautifully!
Posted by Stacy Luce at 12:03 PM